Shockingly, late November might not have been the best time to get a new horse.  Of course in theory, it was perfect.  Get him home right before a 4 day weekend, have unlimited hours of playing. Winning all over.

In reality he came home Tuesday afternoon and the temperature started dropping Wednesday morning.  By Wednesday late afternoon it was frigid and snowing.  Snowed pretty much all Thanksgiving and stayed well below freezing and overcast until this morning.  When I had to go back to work.  Thanks Colorado.  I guess this why most people buy horses in the spring?  Oh well, I always have liked doing things the hard way. 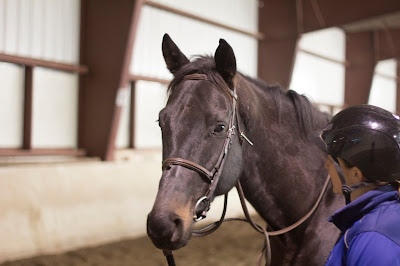 Luckily, Odin has been more than up to the challenge.  I have sat on him every day except Saturday, just letting him wander around the indoor mostly with gradually increasing amounts of trotting and Sunday we even cantered a little.  In spite of no turnout, being in a new place, and the weather, he has been a champ.  If he keeps this level of sensible brain he is going to be a perfect horse.

He did get some turnout in the indoor on Thursday and enjoyed a little bucking and running which was cute and surprisingly short lived.  Then Sunday morning I threw him on the longe since there were too many horses for turnout and I thought he might need play time. I also don't know if he had ever worn a quarter sheet before and didn't know if he would object.

Odin just lazed around all "why are we doing this small circle crap?" and then went quietly under saddle.  We did our first real trot work and he just got better and better as we went.  Softening in the contact and actually holding it there, reaching more under himself.  This is definitely a well started horse which will make life easier as we go.

Like most horses I have ridden, he is more flexible to the left and we have work to do on the right.  But even to the right he has reasonable softness, just requires more work and more leg.  Always more leg!

Not going to lie that cantering is a bit more of a mess at the moment.  He has been mostly out of work due to the popped splint so he is pretty weak behind.  Add that to his stifles not being of much help at the moment and it is a struggle.  You can tell he mentally knows - he threw in one perfect transition to the right, but he isn't strong enough to really hold the lead behind or canter more than a lap without losing rhythm.

And I was warned when I bought him that his left lead is not solid yet.  Which the vet said isn't surprising as his right stifle is the weaker of the two.  So we didn't even try that lead.

I also didn't want to push the cantering as he was starting to get a smidge more exciteable.  He even spooked once by scooting forward two steps.  That was adorable.  Please Odin, let that be your spook forevermore.

All of which helped us develop our short term game plan.  To be conservative, probably two more weeks of light work to be extra sure the splint is set.  He also is due for the farrier but with our farrier's schedule might go late, so again, keep it light until feet and splint are good.  Focus on the trotting and maybe add some poles in during this time.  Some longing and side reins are in order to start building up the back end/stifles and get back into canter transitions.

Most importantly, act really cute, make friends, and learn more about each other.

Posted by MostlyHarmless at 5:52 PM 4 comments:

After a fun summer spent riding other people's horses (OPH) I decided it was probably time to get back in the market.  I need a project in life and while part leasing Clementine was awesome and she is a fun mare, I wanted my own project.

Horse shopping was not as fun as I wanted it to be.  It took me a little while to figure out what I was looking for so I spent a lot of time perusing ads and then thinking about what appealed to me or didn't about that horse.  For example, I wanted a horse that was brave to fences after Fawkes took a chunk of my confidence but I didn't want a totally made horse.  So I focused on horses that had been started over fences but were still green.
~Around 5 or 6 although not firm on that.
~Forward thinking but not crazy.
~15-16 hands or so as I am a fairly small person
~Reasonably priced for their breeding, experience, etc (that was probably the hardest of all.  Some people really like to ask a lot for their warmblood mutt that has never done anything)

The very first horse we met was a 4 year old TB, track bred but never raced, chestnut filly. She was sensitive but sensible, clearly loved to jump, and fit me really well.  It seemed too good to be true and it sadly was  - she failed her vet check.  Her owner had her from a young age so I don't think she knew about the arthritis in the hock, but maybe I am being too nice.  Either way, I didn't want to take the risk.

I was so bummed, I get attached way too quickly and easily with horses.  After that was just a frustrating month or so.  People would say they want to sell their horse and then cancel a showing last minute or just stop responding.  One horse went on the market on a Saturday night, I scheduled a showing for Sunday afternoon which was the first time the owner was available.  She texted me around lunch saying the horse had already sold.  I gave up even trying to schedule my trainer to come as it wasn't even worth it, just had my husband take video and photos to show her later.

On the positive side, I do think most of the horses I met were advertised honestly.  Except height.  People lie their asses off about height.  I don't get it, people are going to notice that 15.3 horse is really 14.3 but I also admit that I lost all sense of horse size after a short time. I even liked most of the horses I tried but some just weren't the right match and others were overpriced and I think it would be insulting to offer about half what someone was asking!  I was losing hope and winter was coming.  But then I met Oatie.
He is a 4 year old OTTB who didn't make it as a race horse.  Only 3 starts and apparently he was a bleeder.  16 hands ish and by Dynaformer.  I pretty much loved him as soon I sat on him.  The boy has a great calm vibe.  But that doesn't mean he isn't an athlete...
When we went to vet him it was a terrible day.  Wind gusts near 100 mph, the vet was super late, the indoor ring was packed -  and then Oatie was super lame!  As he had been sound when I tried him I had the vet look for the source and as soon as he got the hoof testers out it was clear we had a stone bruise type situation.  Wah wah.  Vet liked his conformation and demeanor and suggested we come back once he healed up.  Can't really flex a dead lame horse.  Sigh. 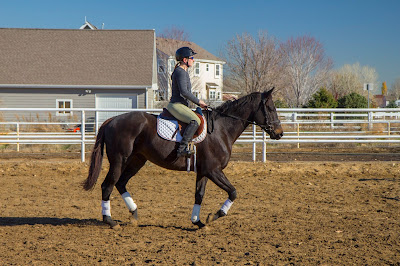 Luckily he healed quickly and we came back for round two.  My trainer decided to send the trailer to the vetting so we could get him home before Thanksgiving if he passed.  I wasn't sure if a little optimism never hurt anyone or if we were jinxing the whole operation but as the blog title implies, we were in luck.

The poor baby has several (mostly) cosmetic things going on - lumps on his head that show he fractured his face on something once upon a time, a pretty recent popped splint, and a lump above his left knee that was xrayed and ultrasounded by the seller so we were already confident that wasn't an issue.  The head lumps mean we should watch out for sinus infections and the knee lump isn't bothering him at all.  The splint was still a tiny bit sensitive but is mostly firmed up.

He did have slightly "sticky stifles" (maybe a 1/5 on flex) but I learned this is common at his age and in TBs.  He has also mostly been out of work while the splint healed so he isn't very fit.  We took a stifle xray to be safe which was totally clean so we are thinking that growing and getting back into work will strengthen them up (on the longe he was swapping leads in back a lot and bunny hopping a bit but while all things horse-wise are a gamble, odds are this all ties together.  Fawkes couldn't hold a lead in back in the round pen for months when I first got him).

After talking it all through with vet and trainer, we decided he would be suitable to purchase!!  I was beyond excited and also probably would have wanted him if he had a broken leg so I am not sure I should be allowed to make decisions like this.  It was such a relief to be told I now had "permission" to fall in love!

While his registered name of Hay Oats and Water is just terrible, I kind of thought Oatie was cute.  So I decided on the name Odin with a nickname of Odie.  Although with that dark bay coat it will be super tempting to show him under the name Slightly Darker Black (I love Archer!).

He has been settling in really well at our barn.  It is cold and snowy and he has taken it all in stride.  Clearly I don't expect him to be perfect but so far he just....has been. Under saddle and on the ground.  Of course there will be challenges but we are starting off on a great note.

We are going to be taking it slow.  Give the splint a little more time, get him some farrier work as he is a little underrun in the heels, and even then he was a late foal and won't even be 5 until May. We are in no rush.  But I am very excited for his future.  I am so grateful he made his way to Colorado and we found each other.  And I am back in the blog game to track our adventures!
Posted by MostlyHarmless at 3:55 PM 10 comments: