I haven't had a ton of time to write because I have actually been getting in lots of saddle time in addition to running and core work.  Ah core, I hate you so.  Even running is easier than trying to build core strength.

But Odin, I love him the most.  And even got a few new pictures! 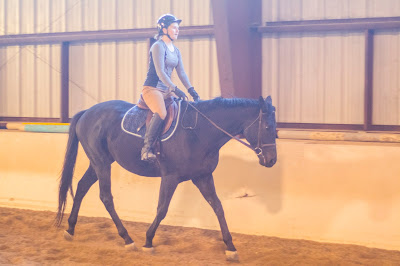 He has just been awesome lately.  Or maybe he is just the same awesome horse as always but I have been more appreciative.  Whichever.  Besides a brief day of lameness (him and 4 other horses got unhappy feets after it rained for the first time in months - a round of thrush buster fixed it in a day), we have been in consistent work with plenty of jumping!

We did two jumping lessons last weekend mostly focused on a line and Odin just got better and better.  Definitely starting to jump more out and over the fences.  I hope to get jumping media since I would love to see it myself.

Lead swapping is still a project but the baby crawling steps of progress are happening.  So no complaints here, just happy horse time!
Posted by MostlyHarmless at 7:42 PM 5 comments:

After months and months (and months) of trudging along slowly, Odin has occasionally been showing moments of true brilliance. Not that anything is changing in our day to day and I expect another year of slowly plodding along, but it has been...motivating I guess...to see what we are trying to bring out of that ever changing body.

For example, our canter right has mostly been mediocre at best.  He struggles to hold the lead behind, tends to counter bend and lay on your inside leg, and then just lean on the bit and be downhill as hell. It's pretty attractive.

We have been chipping away at it and making progress, but it hasn't been anything to brag about.  Then randomly, the other day he was doing his usual and I asked him to come back to trot to rebalance.

Instead of trotting, he set back on his butt and offered this lovely, floaty, slow canter.

It lasted for maybe 6ish strides and I am not sure either of us understood what had just happened.  It hasn't happened again to the right, but to the left it pops up now and again.  If that is what his canter will be like once he is all grown up and strong, I will be one lucky horse owner.

Jumping this weekend seemed different too.  While homeboy is a natural leaper and loves to do it, he tends to land in a heap on the far side of the jump and we haven't done much to address it yet since we have been building the canter.  Saturday R2 spent a whole ride just getting him to think forward after a jump and it seemed to click in his brain.

I jumped him some Sunday and Monday and both times he landed in a nice canter instead of whatever term means kind of landing on all 4 hooves simultaneously/awkwardly and then recovering.

We did a 4 stride line with cross rails and he nailed it both directions.  Even better, he got a little bit excited coming out of the lines, but came instantly back to me when I half halted

While nothing is 100% yet, I have definitely noticed a shift towards where he comes back to his rider much faster than he used to.

In human improvement land, I have initiated my own training program.  We have a gym at work that I never use because I exercise outside, thanks.  But daylight is waning and they offer this core and upper body strength class that fits my work schedule and is free.  I went Monday and learned that the fact I have ignored my core since abdominal surgery last December is something you will pay the piper for.  My upper body actually did ok, but my whole abdomen hurts.  Jon touched my ribs and I nearly punched him.  Guess I need to ease back into that.

Have also started some really slow, lame jogging for cardio.  My running goals are laughable but hopefully between all of it, I see some results.
Posted by MostlyHarmless at 2:36 PM 3 comments:

Lately I have been guilty of way overestimating my abilities to execute to a plan and getting increasingly frustrated when I fail.

Actually it is partly that my plan was just poor.  I keep thinking I can somehow stay riding fit and ride 4-5 times a week when I have business trips and work obligations and that is just.  Not.  Reality.

My happy little denial train derailed after we got back from Iceland.  I had a week in town, then a 2 night business trip.  I was prepared to get a bunch of successful riding in.  Except I have been traveling nearly non stop and my riding has suffered accordingly, especially my base fitness and ability to have stamina at Denver's elevation. 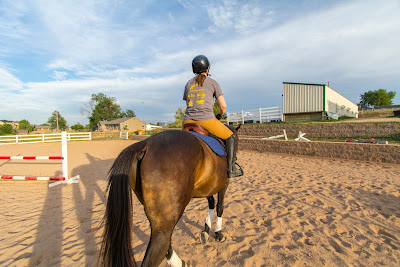 As another memo to future me, when you are away frequently, real life adult things back up in the queue and you spend a good portion of your free time catching up on those, and not playing at the barn like you want to.

So I have been working on being grateful for the time I do have, EXTRA grateful my horse was in training through the end of September (past me knew this shit would all melt down spectacularly, it appears), and trying to be kind to myself when I can't perform to the level I think I should be at.

Luckily, Odin is a wonderful creature who besides his continuing propensity for self destruction - most recently removing most of the fur and skin from his inner right hind while I was in Iceland - is totally amenable to a changing plan and is happy to work at whatever pace I can manage. 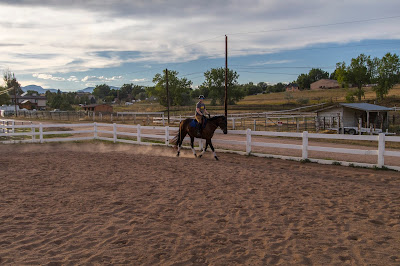 The trainers have been working on next level basics - getting some lift through the withers, stretching over/using his back, not leaning or bracing, lateral movements.  And we are finally getting a canter to work with too.

Since the horse show, we appeared to have some regression on lead swapping.  He was getting incredibly swap happy  - sometimes just in back, sometimes a full, but could barely canter a circle without one or the other or both.  R2 has been putting a lot of time and effort into this.

It was frustrating for me to watch her canter him around and have him hold a lead and then hop on and get 20 feet with a swap.  The main problem is outside aids.  When I go to use the outside rein to straighten him or balance him - swap.  Every time.  R2 has had trouble explaining everything she does, but it amounts to using more inside rein than outside rein and holding outside leg.  If any other bloggers have tips on helping a horse hold a lead, feel free to throw them my way, sometimes hearing things multiple different ways is very useful. 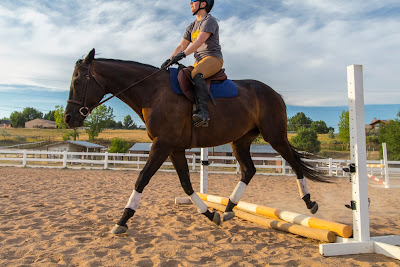 But what we mostly do is circle, and after a few laps of holding the lead on a 20m circle, let it gradually get bigger.  That is hard as hell, horse still needs a lot of help to maintain a good canter and I have to not fuck it up so he doesn't swap, and this requires plenty of muscle control.  I am usually dying quickly.  Improvement has been hugely noticeable but I wouldn't call it solved and some days are better than others.

Side note-  he has been evaluated by the vet and there are no signs of this being anything beyond balance/strength/baby horse stuff.

On the happiest note of all, we have been doing little grids and I love feeling him problem solve them.  He is still figuring out how to get through them, but he attacks it every time and continues to build confidence and ability.  It is even more great since it doesn't rely over much on me, I just get to sit chilly and let him figure it out. 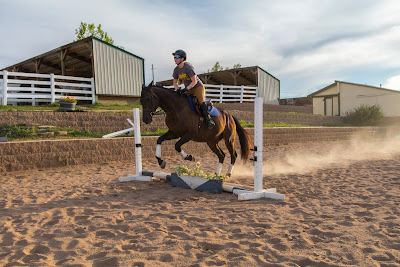 It might be a weird decision, but I pulled him from most training for the time being.  This has been planned for awhile and it is probably not the best timing but I think it needed to happen.  Both to give myself a financial break (I need it) and to push myself to ride more and get stronger.  I expect to put him back in training this winter for at least a bit more (or sooner if I panic), but after starting to feel a little better the last few weeks, I think it is time for the human in this duo to step up more.
Posted by MostlyHarmless at 8:50 PM 6 comments: