Seems like I am in a bit of a blogging funk.  Our rides are happening, they vary in level of accomplishment versus just hanging out with barn friends/ trail rides, and we are ever so slowly getting better.  But that doesn't leave much inspiration for writing about it. 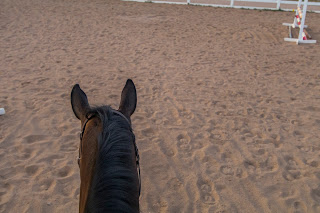 I have been trying to think what I would like to look back on in a year and read about.  Would I want to know that we are still dealing with some residual warm up snark?  It takes a couple times around the ring and a few pony club kicks or crop smacks to get moving and then we can settle into a very nice trot.

Does it matter that he still tends to lean on the inside leg for balance?  Horse can move off both legs like a champ so it is clearly something he goes to when he feels unbalanced or like life is too hard.

Canter transitions are still a little slow.  He almost never gets the wrong lead these days but he is slower to strike off to the right.  The transition there is more correct however.  The right lead he picks up quickly but tends to lean inside to do it.  Swapping is still a thing that happens, sometimes often, sometimes not so much.

Last night he swapped a bunch but never just in back, it was always a full change.  Is that progress?  It is noteworthy? 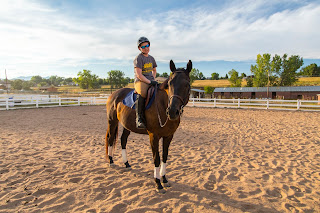 Odin did get a trainer jumping lesson on Sunday and that went very well.  We did some jumping on Saturday that largely went fine but we are still struggling to trot fences.  Apparently I am pulling on him a little bit right in front of the jump which is causing his slow motion jumps.  I don't feel that I am doing that but horse is reliable enough that my new tactic will be to just float the reins the last 5 seconds before the fence.  And maybe I can take some lessons on experienced jumpers since it has been freaking forever since I really jumped and I could use a refresher.

Cantering jumps is easy but Odin is just now getting a canter that you can do something with besides hold on.  R2 did let him canter some fences Sunday and he was a much happier camper that way.  Even with her trotting them it was still a little flail-y.  Trotting jumps is hard, yo.

Had one perfect, flawless lead change and one where he was a couple strides late in front.  Lead changes aren't really going to be his long term challenge, I don't think.

He was great for that ride in every way.  Jumped everything nicely, didn't get too excited when he  got the long spot to one jump (I mean, there was some excitement for sure), cantered jumps on the straight, the diagonal and a bending line.  He bulges the shoulder and doesn't have much in the way of straightness at this point, but he is so game.  Doesn't matter how he gets there, he goes over.  I am stoked for he and I to start trying to put some of this together.

Which will be after his (potential) show this weekend.  Some girls are showing and Odin is going along for the ride.  The plan is for R2 to take him in some classes but we will see how he does.
Posted by MostlyHarmless at 6:03 PM 4 comments:

At least we are trying

Well my grand plans to get back into a rhythm haven't been working out quite as planned, but things are still moving along pretty well.

We did have a moment that was embarrassing to one of us last week.  And for once it wasn't me!  I let Odin out in the ring to roll and he choose to run and play.

While bucking he managed to clip his right front with his left hind and almost flip over.

If I hadn't seen it occur, I wouldn't have believed it was physically possible.  Luckily no worse damage was done.

My rides have been short or nonexistent between crowded rings, weather, late work meetings and the other various things life throws at us, but having him in training means he is getting back in shape quickly.  Sadly leaving me in the dust but I will get it together.  Even short rides help some.

With estrogen and regular work back on board he is able to hold his leads again.  Although the rider still needs to be very in balanced.  Odin, especially to the right, is still figuring out his balance and needs all the help he can get.

It is an interesting mix of lovely balanced canter, then falling onto your inside leg.  Then you push him off your leg which works but he goes faster, so you slow him with outside rein but then he counterbends too hard to the left so you have to also use right rein and then there are two great strides again before he falls on your inside leg.

The canter is still the best it has ever been and he is gradually learning to use his back.  He tries hard but it has still been glacial progress, presumably because he has 4 legs, 1 brain, and not much awareness of how to use any of them in combination.

Last night he was very quiet on the ground, almost suspiciously so.  But there were no secrets, I think he was just tired (it was hot) and he was incredibly snuggly.  Just wanted to drop his head in my arms and stay there.  Who can resist that??

So not much happening in tiny town, just staying deeply in love with this horse and chugging away at our basics.
Posted by MostlyHarmless at 6:55 PM 3 comments:

Gathering up the threads

Now that I am back from traveling and recovered from my jet lag and Odin seems to be feeling better after his fence incident (chiro comes Tuesday as final confirmation), it is time for us to get back into the swing of things.  Find a rhythm and start progressing.  I am mentally trying to pull together observations of our current state and make sense of it.

He continues to fill out, I am going to have to go from my 46" girth to my 48".  And I swear he grew another inch taller.

One of my goals for the next few months is to get rid of the giant muscle on the bottom of his neck and get some on the top.  We will see how that goes.

Thursday night I rode him and he was a hot mess. I didn't find out until later that he wasn't in turn out that day like he was supposed to be and R has been keeping him at short walk/trot sessions so he was just acting out of high energy but at the time all I knew was that he was a freak show.  Spooking at everything, unfocused and when I threw him on the longe line he bucked so high all I could think was, shit, I hope he never does that under saddle.

Guess his back is feeling better.

He was swapping leads all over the place and that night I gave him his first estrogen shot in months.  I have about 4 months worth in stock because I was tired of the inconsistency of it, so hopefully that is helpful.  My vet said that after the first month I should go to shots every other week for a couple months and then maybe every 3 weeks, then if he is still good, do monthly.

Friday I rode him again, in the heat of the afternoon and after he was longed by R that morning.  He was back to his old calm self and I even let him canter around a couple laps.  He swapped leads during the downward transition but otherwise felt good.

I got his fly sheet back from the repair place, so that is one thing that took me forever to get taken care of but is now done.  I give it a week before he destroys it again.  He was also donated a jolly ball which he enjoys quite a lot.  Especially kicking it out of his pen so I can go find it.

His ground manners have gone all backwards.  All of a sudden he is leading like a gentleman (not trying to drag me to grass) but in cross ties he is dancing and impatient, even while being groomed.  No plan there yet, but if he doesn't settle on his own, I guess we will have a boot camp or something. 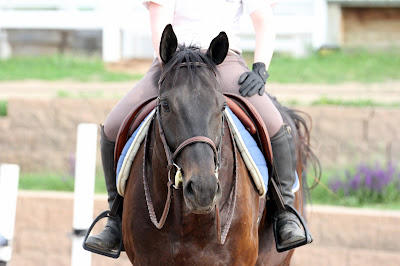 Saturday we did a short lesson and it went well, as out of shape as I am at the moment - I lose fitness insanely fast - but Odin found a new habit to try with nose flipping.  R is having none of that and I expect it to pass as quickly as many other things have.

Today we went on a fairly long trail ride.  He is still weirded out by changes in ground color and texture but a guy started a LOUD weed whacker right next to him and he didn't care.  He is becoming a pretty good trail horse in company, we haven't tried much solo yet.

It has been nice to be able to go to the barn several days in a row and re-connect with him after so much traveling and inconsistency.  Besides a quick getaway with Jon to the mountains next weekend, I have 4 straight weeks in town and I hope we can use that time effectively.
Posted by MostlyHarmless at 8:00 PM 6 comments:

I hate any kind of suspense (yes I do read the end of books first, feel free to hate me), so I will preface this by saying that Odin is fine.

On the other hand, I need him to stop with the self destructive behaviors for a bit.

About halfway through my long, painful business trip to Europe I get a text from a barn mate that Odin got stuck in a fence, they don't know much else.

A few emails, texts and phone calls later, the story as I understand it is:

Odin was in the big turnout, which shares a partial fence line with the small turn out.  He was playing with the horse in the small turnout through the fence.

The playing started to get a little aggressive and Odin kicked at him.  And promptly got his left hind leg stuck in the fence panel.

He panicked for a few seconds, making a lot of noise, and then thankfully froze while the onlookers rushed over to help.  As they entered the field he gave one mighty pull and got himself free.

His leg had only surface scratches on it, none of them were even bleeding, so they cold hosed him and put him away.  The next day R rode him and he seemed pretty sore so they had the vet take a look when she was out.  She said his leg was fine but his back was rather tweaked.  Probably not too surprising.

Baby horse got a course of robaxin and a week of light work and snuggles. Not what I was hoping for while I was away but another lucky close call where the situation could have been so very much worse.  Except for my blood pressure and bank account, it looks like there will be no long term issues.

I was even able to ride him this weekend a little bit and he seems to be using his back better than ever before.  Hooray pharmaceuticals?

I have another short business trip starting tomorrow, hopefully the Odin doesn't feel the need to further mutilate himself in my absence.

Posted by MostlyHarmless at 7:23 PM 3 comments: